Tomorrow Friday September 30th Silvertung's "Devil's Advocate" video will be featured on AXS-TV on their popular Nothing But Videos show at 11:30 AM Eastern. Videos scheduled: Beartooth - "Hated" Thousand Foot Krutch - "Running With Giants" Blacklite District - "We Are The Danger" Silvertung - "Devil's Advocate" Demon Hunter - "The Last One Alive" HellYeah - "I Don't Care Anymore" Metallica - "Hardwired" AXS-TV is seen in over 53 million homes.... 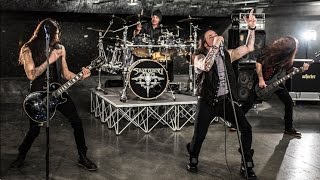 Silvertung is hitting the road on their first North American tour

Baltimore’s favorite homegrown hard rock band Silvertung announced Monday they will take to the road in support of their new album Out Of The Box on the “Hit the Pavement Tour.” Known for high-energy in-your-face rock and roll, Silvertung will be touring the Midwest throughout November with supporting acts Vajra and Via. The tour kicks off in Baltimore at Angel’s Rock Bar on Nov. 4, 2016. The band says their mindset is to return to the old fashioned way of building their fan

Four years ago when ROCKWIRED MAGAZINE was six issues old we came up with the grand idea to dedicate that very issue to 25 of our favorite guitar players on the scene at that moment. And before we knew it ROCKWIRED MAGAZINE had it's first ever blockbuster issue on it's hands. The response to our list got a many excited for the issue and others got their blood boiled over this or that guitarist being excluded. With that kind of response, we knew that the guitar player issue wa